Jobs and roles in business are changing. Take air travel. The pilot used to be revered as the most important position on an aeroplane. Fast forward to today and it is the flight attendant delivering the customer experience who is valued most, as the plane mostly runs on autopilot.

And this paradigm shift is coming to your sector soon warned Jarther Taylor, CEO at Datarati, speaking on Aquent’s AI in marketing panel last night.

“I think all jobs could be replaced by automation. The issue is just the time horizon.”

“The cost and speed of doing business is already decreasing, thanks to AI” and so businesses that are traditional in their marketing thinking will risk being left further behind according to Taylor.

However there are going to be bumps to sort out along the way. For example ‘AI backfires’, where machine learning behaves in an unexpected or damaging way – see Microsoft Tay. “If you’re not collecting the right data you’ll be driving incoherencies” says Chris Collacott from Deloitte Digital. Essentially if you’re not inputting useful data and setting suitable parameters for AI, you can’t expect its results to work. Brand strategies with the wrong metrics can damage reputation quickly.

This is to be expected says Henry Cho, head of UX and AI at Upwire and mobile UX at CommBank. Irresponsible bot behaviour is down to how the program is designed which is why he believes we need to be investing more in behavioural scientists and evolutionary psychologists. “In 10-15 years the nature of intelligence and how we perceive it will have changed”.

Many Australian blue collar workers have lost their jobs, with another 20% expected in the next eight years. While white collar legal professionals, financial analysts and any role involving repetition are also likely to be replaced by automation. This includes coding, so maybe hold off that course which your boss has recommended. Which is why Kristi Mansfield, head of customer experience at Oracle, thinks universal income may be needed. “It’s going to be up to us, it’s a generational point, and we need to solve it.”

It will be difficult to know when an industry will be disrupted. Customers are now willing to spend 400% more for concert tickets than a decade ago, while listening to most music for free, Collacott observed. He went on to say there will be new roles created for humans as “Subjectivity is always going to be important. But what will be hard to replicate is trust and interpretation.” Everyone agreed that technology struggles to imitate emotions and empathy – and even when it does it could verge into the uncanny valley of AI.

We’ll need to readjust to where humans can add the most value. As Datarati’s Jarther Taylor concluded “Businesses need to invest in their people and culture”. Technology will always be changing but it will be the people you have and the the systems in place to embrace it that will result in success. 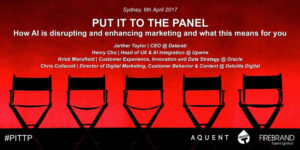