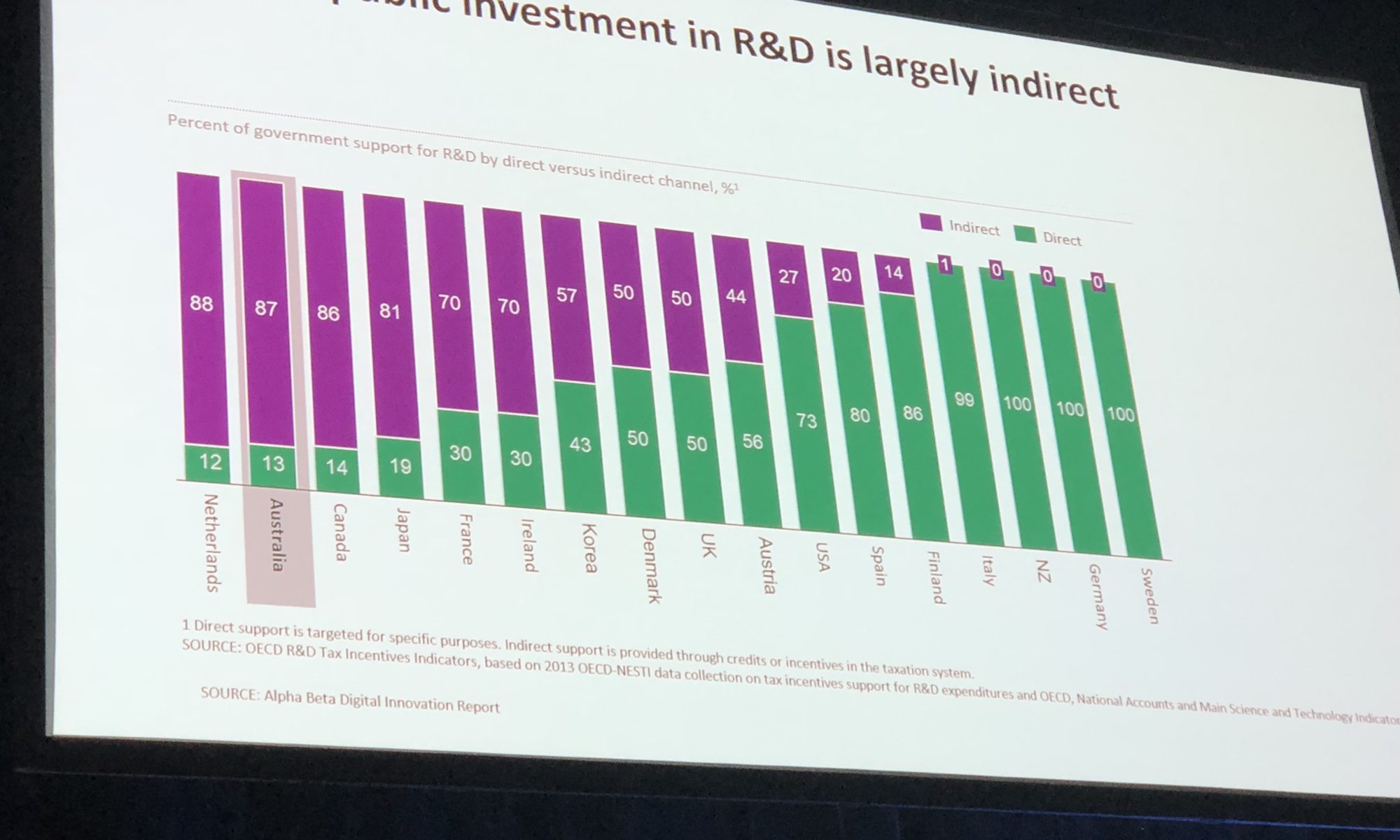 This article was first published on StartupSoda.

We must choose door A.

The advice of CSIRO’s Data61 chief exec Adrian Turner, presenting a new report during his keynote at D61Live yesterday in Brisbane.

He explained that Australia is at a crossroads. A very important choice will fork our future one way or the other. Door A involves us creating our own digital exports – the stark reality is that we currently lag at just 20% of the rate of our OECD peers in this area.

Door B results in lagging further behind, and that’s just the start of the problems that would begin.

How does Australia’s investment into R&D compare with other countries? @Data61news chief Adrian Turner presents a compelling case for why we need a national robotics strategy #data61live pic.twitter.com/DnCnVgXrPg

It’s an argument which Matt Barrie has been making for a few years. Few of the top 10 most valuable companies in Australia make their own digital products. The youngest of our big four was established in 1911! Scaling and exporting in the digital world becomes harder when this is not the case.

Dr Andrew Charlton from AlphaBeta, one of the authors of the report, added that many of the constraints which Australia previously suffered reduce in a digital economy. Challenges of smaller local market, greater distance between population densities and higher wages matter less when competing on the global stage, so “we need to think differently about comparative advantage”.

Adrian made the point that many of the algorithms we use today, have been around since the 70’s – but “we don’t have the tech talent”, we’re already behind and every day “that delta is only going to grow” added Dr Charlton.

From idea to market

The question across the whole day was how to turn the great research which Australia is responsible for, e.g. Wifi, into a product we can commercialise? How can we bridge the gap between breakthrough and branding, taking the product all the way to market? Why is R&D going down comparatively with other OECD countries?

Brisbane’s Chief Digital Officer, Cat Matson, was keen to emphasise that there’s no one party responsible for Australia succeeding as a country. “It’s about how do we still get everyone together” she added, focusing both on celebrating what we can do fast, while still painstakingly and rigorously testing efficiency and market-fit in the background.

However some of the timeframes imposed by academia for collaboration are too slow. AI specialist from Queensland’s Office of the Chief Entrepreneur, Dr Natalie Rens, spoke of experiences with academia, where it can take a year to form partnerships because of administration. “It’s difficult in Australia as research is tied to universities who typically demand extensive IP agreements and take a 30% equity stake in the end product…we need to be more like the States where it’s a one page agreement, maybe 5% equity and let’s go.”

One solution is to focus on specific problems, entrepreneur Bevan Slattery offered. We need more imagineering and problems with a social license which can be approached from a state and national level, life the Reef. We need to ‘reshot’ and find our solutions through science and innovation – which is what the Data 61 Challenge program is doing with its first mission Food Provenance (managing transparency in supply chain) – it’s about “grabbing great thinking, capital and solutions through partner networks” says Data61’s Ben Sorensen. 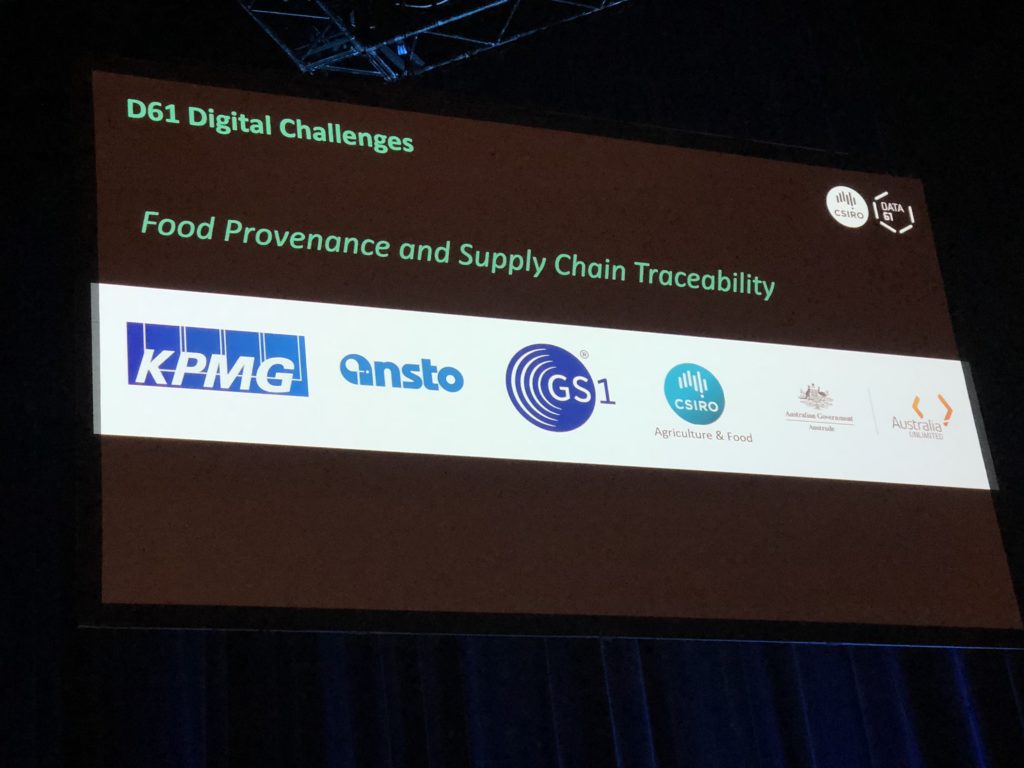 When is a trend not a trend? When it’s a megatrend – typically a large cluster of smaller trends.

Six interconnecting, venn-diagram-piecing trends the latest CSIRO report on the issues focuses on include:

Discussion around Industry 4.0 and the future of automation, brings a unwarranted amount of scaremongering. The megatrend of ‘intelligent machines’ comes with the harbinger of a stat that 47% of jobs will be taken by automation within a couple of decades. In reality though, jobs redefine and augment with technology rather replace. A lot of the repetitive roles may go, but hopefully this will free up time for humans to be more human and add value through creative thinking and applying the technology in additive manner.

"The opportunity is to create new value – it's the additive automation that's really compelling" – Adrian Turner on jobs, automation and work at #D61Live

The benefits are clear, Dr Wen Wu explained the Case Crunch (2017) experiment which pitted 100 commercial London lawyers against AI when it came to predicting the outcomes of cases, given all of the facts. Needless to say the robots outperformed their human counterparts 87% accuracy compared with 62%. There are benefits of standardising elements of decision making.

But there are issues around bias both in the way we think about cases, but also those coding the algorithms responsible for coming to these conclusions. Ethics was a bigger issue which Day 2 panels were looking to address. What happens when all of the coders are white men? 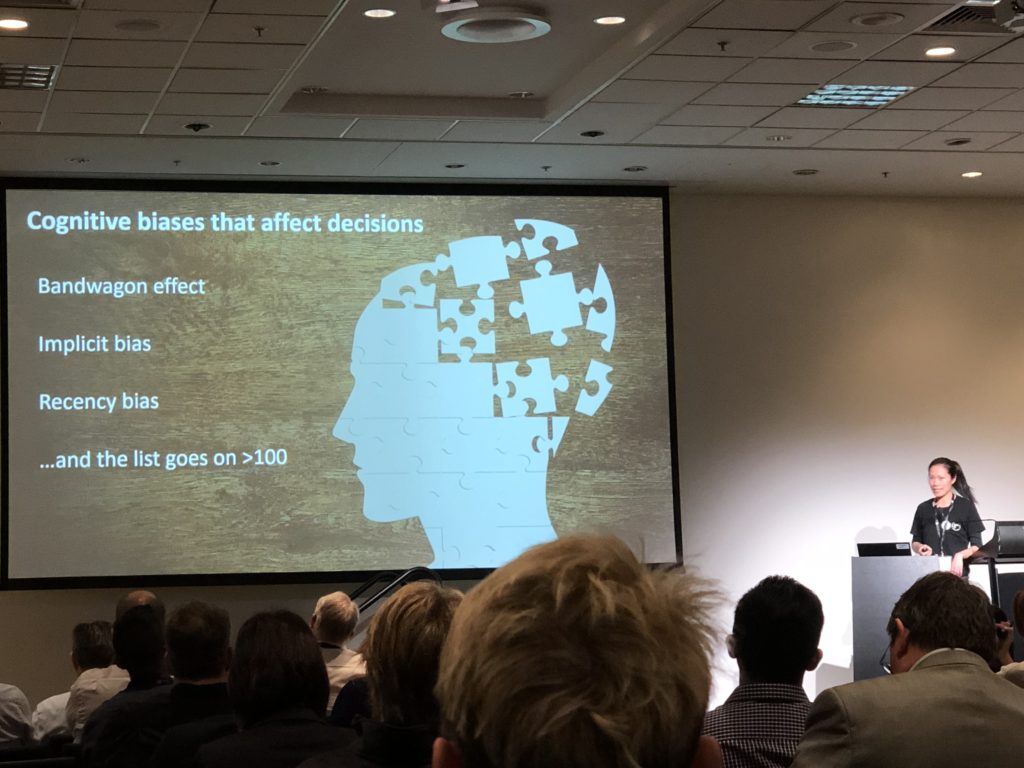 It can’t just be in isolation

The final thought should go to Adrian Turner who warned attendees of the danger of having conversations in an echo chamber alone.

We don’t have the answers but data can certainly help and Australia must become more targeted in its approach to claw back its position on the global stage. All of our futures depend on it.

CEO @Data61news AT: “I worry we are in an echo chamber & talking to people who self select .” Could not agree more! I would welcome opportunity to help connect these very important issues to the broader community via the @inspiringaus network #data61live @industry @BusinessNSW

“Part of challenge is in communications, how do we get public to understand that the things that got 27 us years of economic growth aren’t going to get us through the next period.

“I’m more optimistic than ever that we’ll get through. Because we have to. But also because there’s already been a shift in the last three years” since coming back says Turner.